This post gives a brief overview about the Facade Pattern. The post is part of a series about software design patterns and their UML representations with the help of PlantUML.

What is the Facade Pattern?

According to Wikipedia, a facade can:

Implementors often use the facade design pattern when a system is very complex or difficult to understand because the system has a large number of interdependent classes or because its source code is unavailable. This pattern hides the complexities of the larger system and provides a simpler interface to the client.

What problems can the Facade design pattern solve?

Clients that access a complex subsystem directly refer to (depend on) many different objects having different interfaces (tight coupling), which makes the clients hard to implement, change, test, and reuse.

What solution does the Facade design pattern describe?

Define a Facade object that

This enables to work through a Facade object to minimize the dependencies on a subsystem.

The following diagram shows the Facade Pattern in UML notation. It is based on the corresponding chapter in the book “Head First Design Patterns“: 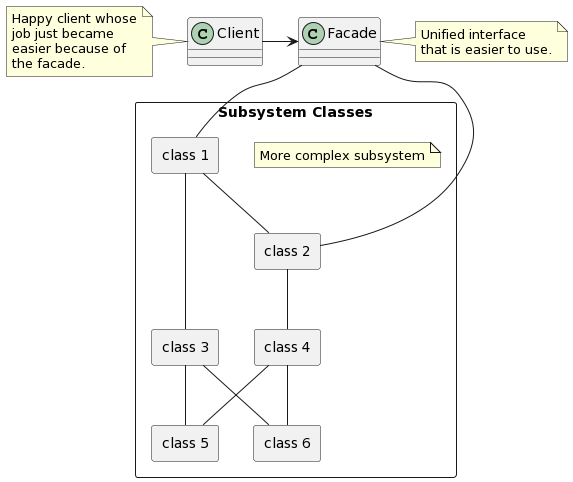