This post gives a brief overview about the Adapter Pattern. The post is part of a series about software design patterns and their UML representations with the help of PlantUML.

What is the Adapter Pattern?

According to Wikipedia, the Adapter Pattern is a design patternthat allows the interface of an existing class to be used as another interface.

Often an (already existing) class can’t be reused only because its interface doesn’t conform to the interface clients require.

The Adapter design pattern describes how to solve such problems:

The key idea in this pattern is to work through a separate Adapter that adapts the interface of an (already existing) class without changing it. Clients don’t know whether they work with a Target class directly or through an Adapter with a class that does not have the Target interface.

The following diagram shows the Adapter Pattern in UML notation. It is based on the corresponding chapter in the book “Head First Design Patterns“: 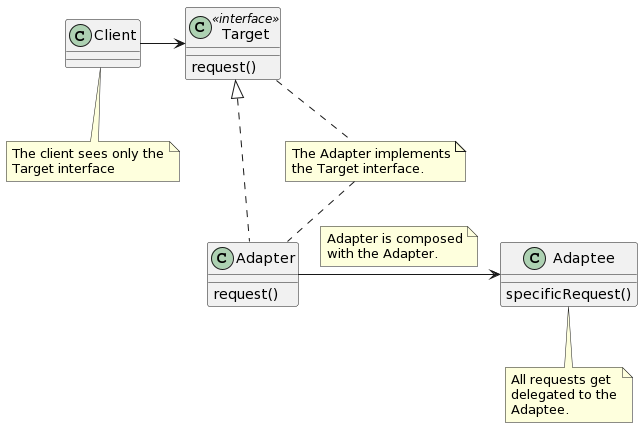